Each administrative document is unique. Depending upon what kind of request is involved, various documents are required – the documents required for forced labour are not the same as those for a political prisoner. Moreover, other documents, such as statements, or original period documents, may be added. 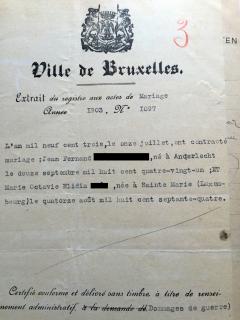 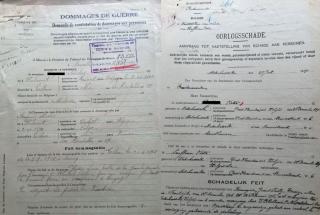 APPLICATION FORM. In most cases, the local authorities provide pre-printed forms. In the event of large groups of victims, the municipal administration sometimes holds general sessions attended by applicants for the purpose of completing such a form. A civil servant often notes down the details, with the applicant only having to sign the form.

This application form contains all the key items of information : the applicant’s personal details and a short description of the events that took place. This may include, for example, information about the compulsory labour or detention, a description of a shell’s point of impact or a gas attack. 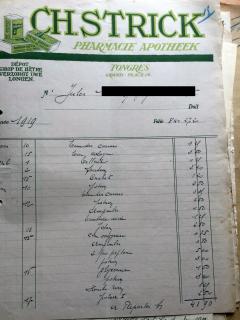 SUPPORTING DOCUMENTS. Application forms are generally accompanied with one or more supporting documents. These are often provided by the municipal authority. The victim does not have many other documents. The only ones that are likely are a certificate from the mayor about the imprisonment or one from a doctor about temporary unfitness for work. These are sometimes also accompanied by witness statements. This, along with some formal items, such as a birth certificate and a certificate of good character, form the basis of a case record. 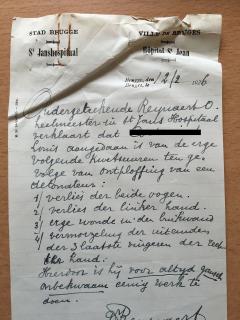 PROCEDURE. In the light of the case record, the State Commissioner writes a conclusion to be submitted to the relevant War Damages Court. The State Commission may decide that not enough information is available to produce such a conclusion, whereupon it is up to the applicant to specify the damage incurred or look for further witnesses. The head of the War Damages Court may also request the opinion of a medical expert, who establishes what the physical injuries are and decides how far these are the result of the war. The State Commissioner then writes new conclusions.

The entire record is then submitted to the War Damages Court. These Courts are temporary chambers attached to the existing Courts of First Instance. Every judicial district therefore has this kind of court. In regions where many cases have to be processed, further chambers are created. Applicants who so wish may be assisted by a lawyer. 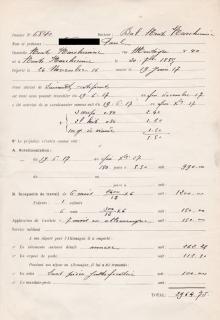 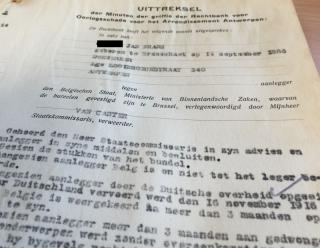 Should one of the parties make an appeal, the process will be restarted: a further search for supporting documents, a new conclusion by the State Commissioner and a new judgement, delivered this time by the Court of Appeal.